The mission of Catholic Charities is to provide for the needs of our community through selfless service under the sign of love.

The vision of Catholic Charities is to comfort, care, and advocate for all people in crisis by strengthening the vulnerable and promoting self-sufficiency. Through all of our programs, our daily activities are intended to lift a person out of crisis, encounter them in Christ, and accompany them on their journey to wholeness.

Stewardship
Catholic Charities, Archdiocese of San Antonio, Inc. is faithful to the purpose for which resources are given to manage them in a manner which allows for maximum benefit to the community and the individuals we serve.

Excellence
The excellence of Catholic Charities, Archdiocese of San Antonio, Inc. is measured by the ability to make significant and lasting contributions to the Archdiocesan community with the goal of moving individuals we serve towards self-sufficiency.

Advocacy
Catholic Charities, Archdiocese of San Antonio, Inc. is committed to being a voice for the most vulnerable in our community striving to provide appropriate and timely services to assist families and individuals when they need us most. 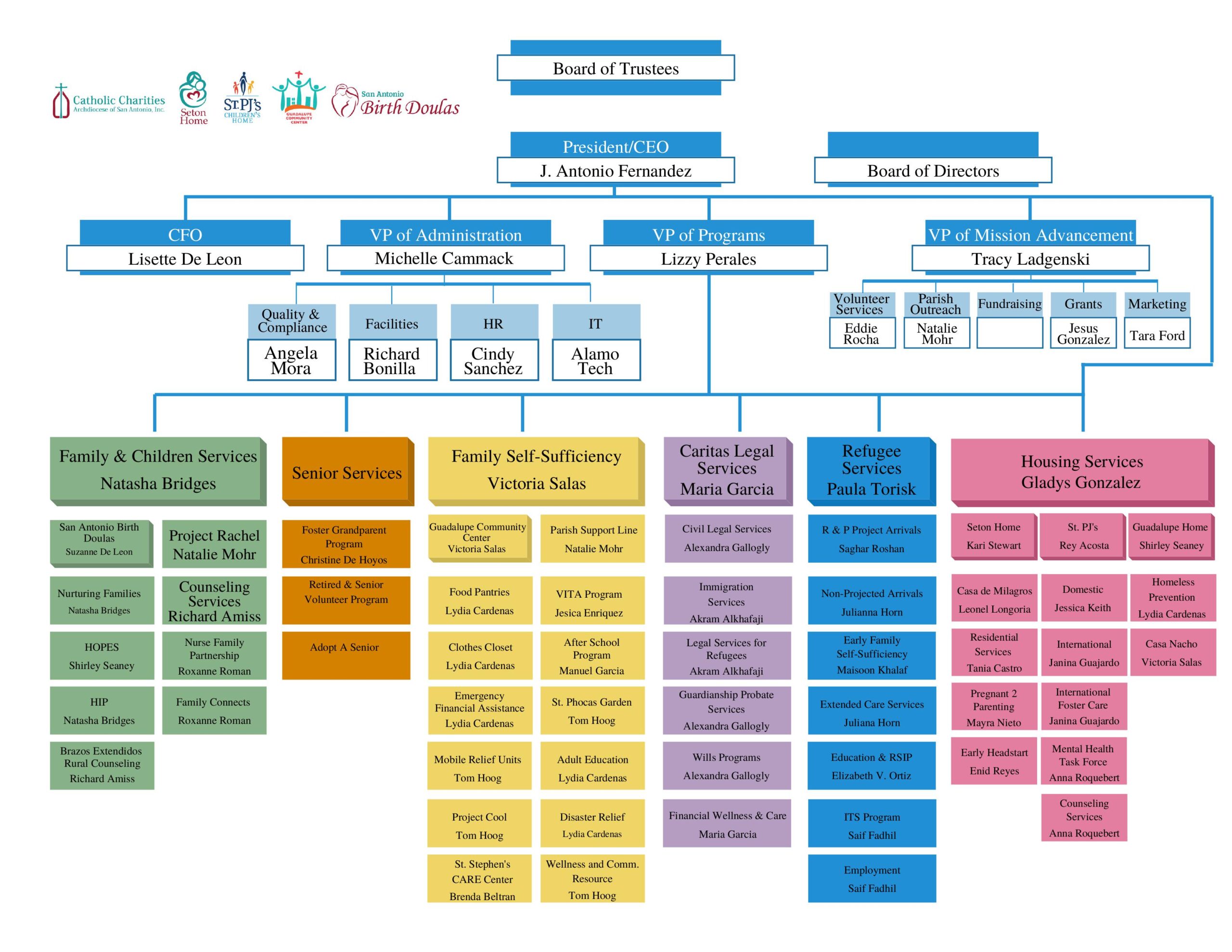 Since 2013, J. Antonio Fernandez has served as the Catholic Charities, Archdiocese of San Antonio President/CEO leading the programs, growth, and development of the largest Catholic social services agency in the city including sister agencies, Guadalupe Community Center, Seton Home, St. PJ’s Children’s Home, and San Antonio Birth Doulas. Under his leadership, Catholic Charities expanded programs from 17 to 45 and quadrupled the annual budget. Previously, Mr. Fernandez was Senior Vice President of Operations for Catholic Charities of the Archdiocese of Chicago, the largest Catholic Charities in the country. In this role, he was responsible for the overall leadership and operations of the programs providing social services and physical plant oversight. Mr. Fernandez also serves on the Board of Trustees at Catholic Charities USA and serves as a member of the Finance and Development Committees. He also serves as a member of Legatus, Knights of Columbus, Equestrian Order of the Holy Sepulchar, University of the Incarnate Word, and on the Senior Staff for Archbishop Gustavo García-Siller MSpS. Mr. Fernandez holds a Master in Business Administration, a Master in Counseling Psychology, and a Bachelor in Psychology. In addition, he is certified for Non-Profit Organizations and is a licensed Professional Counselor.

Tracy Ladgenski is the Vice President, Mission Advancement responsible for raising friends and funds for the five non-profit agencies that comprise the Catholic Charities family. In this role, she is responsible for grants, fundraising, events, marketing, parish outreach, and volunteer services spurring growth for the agency. Previously, she was the Director, Grants for Catholic Charities and the Director, Hope for the Future Catholic school tuition fundraising campaign for the Archdiocese of San Antonio. Tracy is a member of the Grant Professionals Association, the Association of Fundraising Professionals, the United Way Emerging Leaders Council, and the San Antonio Volunteer Administrators. Tracy holds a Bachelor of Arts in Speech Communication from the University of Illinois, Urbana-Champaign.